From Developer Documents
Revision as of 09:22, 30 September 2010 by Toni Kalajainen (talk | contribs) (Created page with '= Background and motivation = The synthesis of the Simantics architecture has its foundation on a series of VTT research projects on software architectures and data models [http...')
(diff) ← Older revision | Latest revision (diff) | Newer revision → (diff)
Jump to navigation Jump to search

The synthesis of the Simantics architecture has its foundation on a series of VTT research projects on software architectures and data models [1] and 20 years of experience from implementation of an industrial process simulator [2]. The resulting synthesis was put into motion in 2005 when a decision was made to start a development of an ontology-based approach for modelling and simulation. The synthesis is a balance between concepts of theoretical computer science and mathematical logic and concrete user needs in industrial simulation and modelling. The position of VTT between the academia and the industry has given the development team a broad view of the state of the art in modelling and simulation.

On objectives and the architecture

The architecture of a software system can very naturally be judged by the way it fulfills the most important objectives of the system. The objective of Simantics can in one phrase can be described as

Productivity should be measured on many levels from Kernel Developer to Model User. It should cover the development of Simantics itself and integration of new tools into Simantics as well as end user tasks. Key means in increasing productivity are

Being a platform for modelling and simulation, the requirements for real-time operations are also a key factor in determining the architecture. 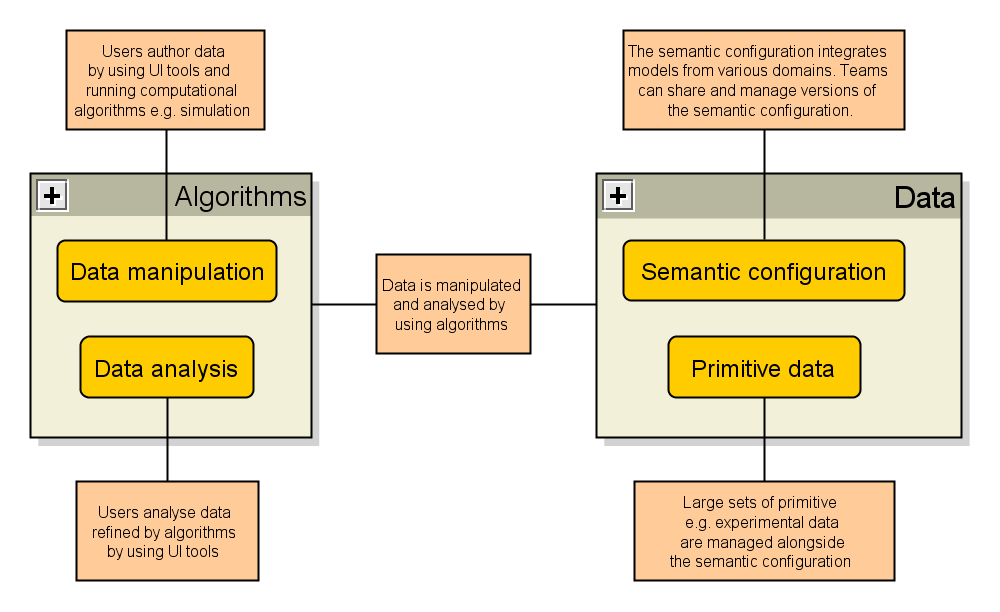 Simantics is a set of services built on top of a semantic data model. The main focus points of the architecture are

Simantics aims to enable a data-driven approach in all phases of the model-assisted decision support process.

The data model is detailed in Data View

Simantics products are built up from a set of plugins. The main implications of a plugin architecture are

Simantics aims to increase modelling productivity by adopting best practices in modelling such as hierarchical decomposition and component-based reuse. Simantics does this by

A focal use case of Simantics is user interface development. Simantics aims to make this quick and easy by

Structure of the technical specification